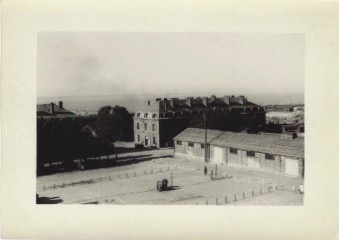 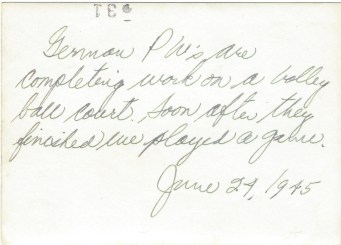 German PW’s are completing work on a volley ball court. Soon after they finished we played a game.

With a camera and a pen, my dad recorded for all of us many of his experiences and thoughts while in Europe during World War 2. With nearly 200 photos, many of which have incredible descriptions inked on the back, my dad left me a bit of a puzzle. While I have a pretty good idea of my dad’s story–including the six-month interruption in these photos caused by his internment by the Germans–spending the time to focus on these photos and inscriptions while I publish them here will surely help me fill in some of the blanks. I plan to tell the story of this enlisted member of the Army’s 87th Infantry Division, the Golden Acorns. And in doing so, I want to share his story told by these amazing mementos with the world.

This is a text widget, which allows you to add text or HTML to your sidebar. You can use them to display text, links, images, HTML, or a combination of these. Edit them in the Widget section of the Customizer.
Loading Comments...
%d bloggers like this: