During the early stages of the American European offensive, “cigarette camps” sprung up as staging areas for American troops about to engage in battle. After the German surrender, the camps took on a new life as as disembarkation staging areas for GIs waiting to sail across the Atlantic to head back home. The camps were named after cigarette brands to help conceal their location from the Germans, and actual cigarettes were plentiful, which was welcomed by many GIs.

One such camp was Camp Home Run, located just outside Le Havre, France in the town of Sanvic. After his release as a POW, my father Bernard McKenzie called Home Run home for about a week at the end of June, 1945. Learn more about the cigarette camps and Camp Home Run here. 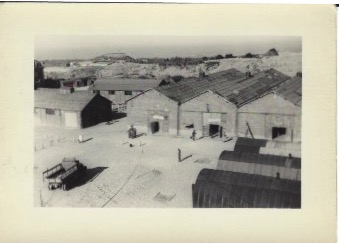 A view of Camp Home Run. Notice the German forts surrounding the camp.

This is a text widget, which allows you to add text or HTML to your sidebar. You can use them to display text, links, images, HTML, or a combination of these. Edit them in the Widget section of the Customizer.
Loading Comments...
%d bloggers like this: