After nearly 7 months in Europe representing America and the Free World (he went there to fight, really, or at least to help care for those who did and got injured; but he ended up getting shot himself, got disoriented behind enemy lines in the Ardennes during the Battle of the Bulge, and was a POW for the rest of the war), Bernard McKenzie was headed home. 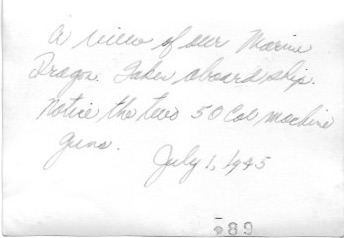 A view of our Marine Dragon. Taken aboard ship. Notice the two 50 cal machine guns.

From his stories and from these photos, my dad made dozens of lifetime friends and acquaintances. Even if they never saw each other again after Europe, their connections were remarkable, memorable, forever. For information on the SS Marine Dragon and other C-4 ships go to http://www.usmm.org/c4ships.html.

Merrill Baker. Taken aboard the Marine Dragon. Enroute to U.S.A.